by Deep Thought
From SBE 26 this morning:

"Sad to say this but former WLS C.E. Warren Shulz passed away on December 31st at 11:30 a.m. He is free of his pain & suffering. He will be waked on Thursday, January 3, 2019, at the Solan-Pruzin Funeral Home, 14 Kennedy Ave (corner of Main & Kennedy Ave) in Schererville, Indiana from 2:00 to 8:00 p.m., with a prayer service at 7:00 p.m. His obituary will be in the Chicago Tribune on Thursday, January 3rd. You may also go on the Solan-Pruzin web page Solanpruzinfuneralhome.com. Thank you," Donna Shulz.

"Please know that Warren was well respected by the entire industry, and better off for the things he did and the people he taught," said Barry Mishkind

According to Cliff Kotchka, "I saw Warren a few weeks ago. He was a little worried that his 43-foot vertical wouldn’t hold up to the winter winds, so I guyed it for him. It was a nice visit. I spent a couple of hours with him in the workshop while I engineered some insulating rings out of poly cutting board using some hole saws. Then I erected the antenna and he tested it on all bands. We finally pumped about 600 watts into it and he was happy. I think the afternoon took his mind off things...He slid downhill rapidly after I saw him last, so in the end it wouldn’t have mattered. At least our last visit was a good one." 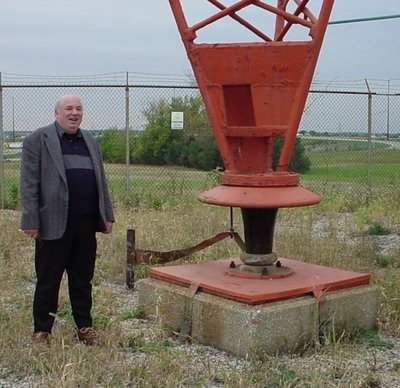 by BroadcastDoc
How sad - he and I exchanged emails several times over the past few years. He had read an article that I had written and he had passed along his thoughts on it. We always talked about getting together, but now I really regret not making time to do it. He was very passionate about the business and its future, and I really enjoyed getting his take on things.

by Deep Thought
I got to work with him during the WMVP aux at WLS diplexing project out in Tinley Park and also during his construction of the WLS-FM backup-backup transmitter/antenna out at the WMVP site in Westmont before he retired, and we've chatted about lots of things over the last 30 years. He most recently tried to recruit me as an inspector for the Illinois Broadcasters Association ABIP and also for a NAB Engineering Handbook article. I'm really going to miss him...he was a solid guy and an engineer's engineer.

by RGORJANCE
I had some great times working with Warren. I was in a unique position as an "arms dealer" supplying equipment to both Warren and Gary Shrader. These were two of the three best radio engineers I ever met/sold equipment to, (Al Antlitz) was the third guy) and were always trying to top each other with equipment upgrades. I worked closely with them on the Sears Tower FM antenna project. We had lots of meetings, laughs, and in general very professional meetings. They were a distinct pleasure to work with.

The great ones always leave way too soon.

by kkiddkkidd
I never met Warren in person but talked with him numerous times about potential projects over the years. Our conversations always started with the project at hand but devolved into broadcast or ham radio in general. I knew that he had retired from WLS but did not know that he was ill until recently.

by andshar
I was shocked to hear that Warren had passed way. I worked with him as his assistant at WLS for about ten years. I learned so much from him. He was a walking encyclopedia of both practical and theoretical electronic knowledge. I have never known anyone who documented more thoroughly. A great friend!
All times are UTC-06:00
Page 1 of 1