Want to know how something works? Harness the power of the Brainiacs!
Post Reply
154 posts

Wednesday four of us tried to haul the mounting ring (not the dish--which is made of four aluminum petals--but just the iron mounting ring). One 31 year old guy and the rest of us--61,68,70. Couldn't get it on top of the pole. Re-rigged Thursday with a gin pole, got some muscle, hauled it up and on top of the pole. Now we'll try to assemble the "petals."

We're going to start reading books over the air....


Have a set of drift pins handy, it will help speed up the petal alignment process. Put one of those up last year with no issues, and it moved to AMC18 easily.
Top

Indeed...at 55, I was the youngest of the foursome that lifted our ring onto the pipe.

Working on a combiner project last week I noticed the owner of the other station had a big ol comtech behind the studio, and asked if he had made the move yet, which was a no. Since I had my spec-an and some spare time I offered to help. Well, I pulled the van up behind the dish and this seemed to b about a 3m dish not a 4m as I had thought from a distance. had a crank for the elevation, and the bolts broke loose easy. swung it around and used my new digital inclinometer and got the westwood signal on the spec-an. Easy! hah, so I thought. went to adjust the skew and what is this? a plastic, "yoke" (probably not the correct term) around the feedhorn and its cracked straight through where the setscrew is and the feed rotates quite freely...I guess skew really wasn't critical on that old bird.....

so try as I might I kept getting signals where the should have been noise.....the premier XDS didn't care it had ebno's around 10-11 the whole time. the westwood XDS and Wegeners however were not happy at all, ebnos between 5 and 8......Best I can figure is an adjacent bird, this dish is probably not 2 degree compliant. also the LNB is +- 500khz stability. but that shouldn't cause me to see other carriers on the spec-an right? I know it will affect ebno.

The owner is going to order a new dish and LNB. hope I gave him good advice.

Going to do 3 more of these next week and one is a mesh that I doubt will work, which the owner is aware of.the other two are big comtech 4m.
Top

Why I replaced my Comtech--our LNB mount is also split where the set screw runs. We glued it, so it is stable at the moment, but no sense in fighting this on a 35 year old dish. I understand there is a replacement available--for $1K.
Top

TPT wrote: ↑
Tue Jun 06, 2017 5:46 pm
Why I replaced my Comtech--our LNB mount is also split where the set screw runs. We glued it, so it is stable at the moment, but no sense in fighting this on a 35 year old dish. I understand there is a replacement available--for $1K.

so that plastic bit IS factory? Iv'e only ever seen aluminum ones, but I've only ever worked on the big 4M comtechs....
Top

Factory. It's kind of a dense plastic, but after a number of years of sun, wind, ice, and more sun it got a bit brittle.
Top

My daughter and I finished an install this week. 3.7m dish from Dawnco. With a Bird Dog, looped through to a spec-an, and then final-peaking with one of the station's XDS receivers, we got 12.9s out of it... called it good and locked it down.
Top

Then...there was this one.
To reach it we had to park a bucket truck in the driveway of a small coffee shop. They were not amused and called the police, who told us to move the truck. Now.
This, despite my sending a letter to the place last spring AND leaving several messages (none returned) to inform them ahead of time.
So stepladder it was.
Can't reach the LNB but they moved the dish anyway. Got reasonable numbers, 10-15 Eb/No and Ag 's 50'-ish, actually better than on the old bird.
That lasted about 1 hour when several of the Eb/No reading simultaneously fell into the 7-8 range, while others remained unchanged. AG numbers still 50-ish, unchanged. 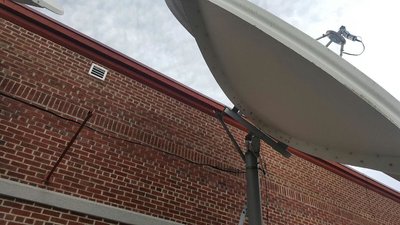 Reported on another list... There was an uplink disruption around 11am (eastern I assume) Friday.

Replace the whole scalar with a manually adjustable unit. Harvard Scientific and Chapparal are the only manufacturers that I know of but there may be others.

Otherwise, just pop the actuator servo off, twist the pol adjustment for best crosspol null and put a piece of duct tape across the adjustment to keep it from creeping. Be aware that the hairpin type motorized pol scalars don't give the same level of crosspol rejection that a manually/fixed pol unit does.

I have a couple of elevated dishes that are always a PITA to do anything with. Can you get a bucket truck to the dish when the coffee shop is closed?

Thanks Kevin.
Gave the dish a nudge and the EB numbers came right back to 12-15+ That mount is unstable.
The coffee shop does not close until 9pm which gives us about 15 minutes of daylight to work. May have to work out a deal directly with the building's owner.
I think I will take your advice and replace the entire assembly with a manual unit with a new LNB, and probably add a snow cover while I'm at it.
Fun, fun.
<><><><><><><><><>
Chuck Gennaro
Central Wisconsin
www.northwoodstech.com
Top

Apparently I didn't armstrong the bolts tight enough on this Comtech dish. Wind spun it a little bit over the weekend and there were a lot of unhappy receivers.

The engineer who fixed it took one of those "thousand word" pics. Insert your own caption.... 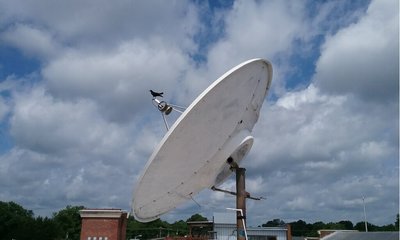 Ummnn.. Would the crow have anything to do with your loss?

Looks like it is pointed right at the bird to me.

I had a first yesterday... In the midst of a pure BS vehicle day where I had to have both a U-joint AND an alternator replaced within less than 24 hours from each other while over 100 miles from home... I accidentally pointed a dish.

While waiting on my truck to be looked at the first time (odd noise/vibration from the rear end (easy on the snarky comments)) by a local garage, I started the reaimed of a beat up, egg shaped 11ft mesh TVRO dish... It was a polar mount that was never set to follow the polar arc AND must have been installed by a transplanted Canuck satellite dish tech expecting 6ft of snow in southern TN. With the dish tilted all the way down, the bottom of the reflector was 4ft AGL which put the feed almost out of reach from an 8ft step ladder. With the dish pointed in the general direction of AMC18, the feed/LNB was truck bed + 8ft step ladder + 5'9" station owner on tippy toes on the top step AGL. Thankfully this guy isn't the typical owner and has a life and skills outside of radio and wasn't afraid of tall wobbly ladders.

I replaced the non-functional crank actuator with an all thread and unistrut hardware adjuster and then set the elevation to something resembling the expected EL, set the polarity to something reasonably close and then roughly shoved the dish east to where I wanted to start looking for AMC18.

And without knowing it, shoved it close enough to the AMC18 AZ/EL for ESPN & Premier rxs to acquire and lock without so much as a peek at a spectrum analyzer. Imagine my surprise to walk into the equipment room to find a receiver rack with a bunch of green lights. It took 2+ hrs more fiddling to get the WW1 rx to be semi-happy but eventually we got 8ish EB's on WW1 and 13's on ESPN and Premier. The cross pol null on this dish was horrible due to all the humps, valleys, hail/lawnmower damage and tippy-toe adjustments.

The owner was hoping to reuse this dish but was pre-resigned to replacing it with a new compliant dish if necessary. It is stable for the minute but he is ordering a replacement after the rush is over. Adjusting the polarity while standing tippy toed, on a too high step of an 8ft step ladder, precariously balanced in the bed of his Chevy PU, being held (the frigging ladder, not him) by a sweaty, bald, fat guy seemed to be the deciding factor.

And somewhere in all that BS, my truck quit charging... I noticed that the batt voltage looked odd as the rear end rumbled and vibrated (be kind) but was more focused on the potential $$$$$$$ and down time of wheel/carrier/pinion bearings 100 miles from home. The shop there correctly diagnosed it as a binding U-joint and thankfully a local parts house had one in stock. After a U-joint replacement Monday afternoon at 4pm, the Ram got a new alternator at 8am this morning (Tuesday) after an unplanned overnight stay 80 miles from today's dish move.

Today's dish move morphed from another wobbly, beatup, Canuck mounted, 10ft TVRO dish to a very solid, decent looking, 12+ft, long abandoned AFC dish with all the pieces parts available. We took a couple of hours to gather scattered parts, lube & work hardware loose, replace the long deteriorated AFC feed mount connectors with common threaded PVC connectors & mount a new LNB. We swung that big bugger around and had >15 EB's on Premier and 13+ on WW1 in minutes. Supposedly, a TN Radio Network eng had deemed the AFC defective and replaced it with the wobbly TVRO dish about 15yrs ago. Not sure why the big AFC was sitting abandoned other than maybe the feed supports falling out of it due to AFC's junk plastic connectors, but a few hours work and about $10 in PVC parts put it back in service.

I made it home about 7pm today (Tuesday) with quite a sense of accomplishment for having survived the past couple of days with no wrecker nor ER bills. Lots of other bills but nothing indicating blood loss or court dates.

I have one more regular client to finish up Wednesday (yet another AFC dish that is mostly moved and refitted by owner but needs tweaking) and then will start working on the PNC's (procrastinator non-clients) Thursday.

Based on reported data from at least one network saying that there is still as many as 30% of affiliates still operating on AMC8 freqs, I fully expect to have a flood of PNC's over the next couple of weeks. I already have 3 widely spaced moves semi promised this weekend and next week.

Never a dull moment but I don't know if my nerves can stand much more vehicle problems.

Return to “Ask the Engineers”