Hoping some folks more familiar with this box than me can lend a hand. And Yes I have been asking for a new transmitter for years, but for the time being I need to try to get this one back on the air.

WE had a Roof leak in the TX building, of course while I was trying to take a short vacation. Not knowing what was going on, other than a storm, which frequently cause\d power bumps and other issues that take the box down, I got a call from the remote, with no power and no plate volts, so I issued the command to turn it back on and it came back up. sweet, back to my vacation right? well for about 5 minutes anyway. Called back and it's off again, and now it won't come back on...well this isn't too abnormal, usually this means the bias breaker has tripped and usually someone goes and resets it and its fine.

Since I"m several hours away, I call my boss who has been up there before and actually lives right at the base of the "Hill" that the tower is on. He runs up there and I get a call, which is when things go down hill. Hew says the roof is leaking, into the transmitter. I have him shut off the main breakers in the panel and he gets a bunch of rags and trys to keep any more water from getting in.

In the morning when it stops raining he tries to fire it up..bias breaker trips imediatly. I get there around noon and we open it up.

The digital controller card has a puddle of water resting on top of it. the bottom of the main cabinet is wet PA cavity seems to have been spared. WE open the front and back panels and i run a floor dryer blower through it, and start putting the "Exciter" to the antenna. This box was already hacked up before I got here. The "ecxciter" is a 500W bext transmitter that drives the PA directly. The old Exciter, preamp, driver and IPA have been removed. APC has never worked since I've been there.

Dried out the cabinet for nearly two days. I took the digital card home, dried it out, cleaned with alcohol and a toothbrush, dried it out again, and reinstalled it. Bias breaker still tripping, though as of yesterday It now takes a few seconds. I noticed a few yellow sparks before it tripped coming from around the back, looks like the remote screen control board 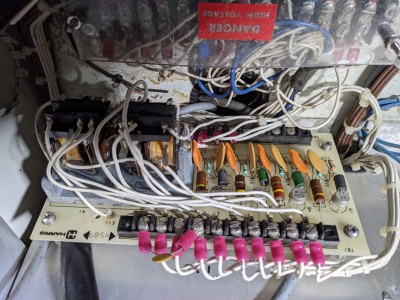 I also see two more potential problems, something arced here, maybe from a drop of water, or maybe it's been that way for years and I never saw it before: 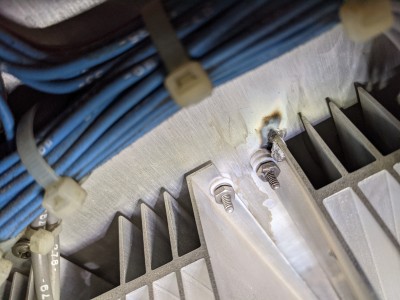 and the plate voltage that comes over from the HV cabinet on RG213, well is there a way to fix this, some silicone caulk maybe? or am I going to have to re-run some new RG213? 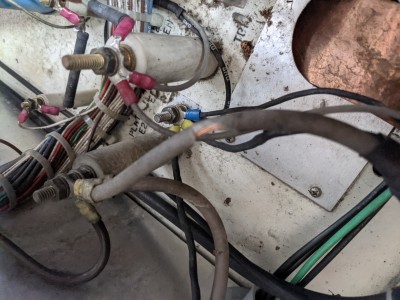 Being a younger Guy, tubes are still something of a mystery to me. I can infer from the manual that the Screen has something to do with power control, but I have no power control on this transmitter, other than the power from the 500W Exciter driving the PA....

Can I safely disconnect this board, and see If I can get the breaker to stop tripping? that breaker in addition to Bias supply and powers the controller, and the motor that drives the screen control Rheostat.....

Any other advice? not that it matters much but I'd estimate the amount of water that got into this thing was maybe 12-20 oz, about a bottle of water's worth. The HV cabinet was spared any water fortunately....

Roofers are coming today to take the emergency tarp off and fix the roof. 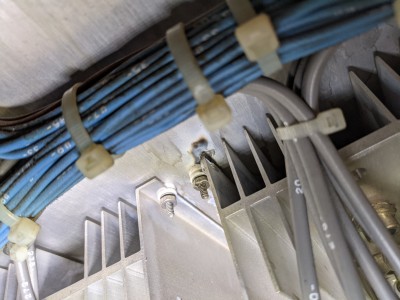 My first question would be: Does he have insurance on this transmitter?

I am not very familiar with this TX. Were the HV and other transformers wet? Does it trip the bias breaker before or after you hit plate on? Does it make plate voltage? Do you see any bias voltage or current? Have you tried sticking in a known good tube (or at least one that is known not to be shorted)?

The arc that you show pictures of appears to be an insulated heatsink for rectifiers of one of the power supplies. You need to make sure that isn't shorted to the panel and also check the rectifiers. They may have been damaged when it arced over.

You may be able to cut the damaged section off of the HV coax and reterminate it. A lot of times there is slack left hidden somewhere that can be pulled up. On the other hand, I have found that coax sometimes gets very brittle with age and any movement makes the jacket crack and fall off. In that case, you would have to pull new.

The screen of the tube is used for power control but it is an essential voltage for the operation of the tube. It is typically around 10% of the plate voltage IIRC.

Good luck, I'm glad that you have the exciter on the air. Water damage can be maddening to repair and sometimes just isn't repairable... Hopefully you have insurance...

Yes I do believe there is insurance. In our Kansas market they had a transmitter building hit by a tornado, about a year ago. Insurance covered some but not all of the cost of building repairs and anew Nautel GV20 to replace an old continental 816. They just took delivery of the Nautel last week...they were running at some power level the whole time but I'm not up on the details....So either way, while there may be insurance money to be had at some point, I'm living in the now of the boss wanting me to (at least try to) Fix it....Though I'm told the 500w into the 6 bay antenna is getting out there pretty far, I'm sure were not hitting Nashville like we should.

High Voltage Supplies are in a separate Cabinet, which remained dry. They send the various HV's over on pieces of RG213, RG-8, and RG58, they go through Conduit, and I don't recall seeing slack anywhere....So that is 8KV going down that RG213 Center conductor! I'm betting it is all brittle. the shield is grounded at each end. Do you think there is anything special about the ring terminals crimped to the cneter conductor Or can I just use hardware store specials? I"m sure the insulated part of it isn't rated to 8KV, but the current is low so the metal should be ok?

Filament and bias transformers are in the cabinet that took water, I can not say for sure that they did or did not get wet but they apeared dry to me and I tried as best I know how with the tools availible (DMM) to check for dead shorts and shorted windings but I don't know what the Normal resistance I should see between various taps should be, but there did not apperar to be any shorts to the frame, cabinet, or between windings

The Bias Breaker Also delivers AC to a pair of transformers that go on to the Low Voltage DC supply that runs the controller, thus I"m stuck at step 0 of the startup sequence Nothing can happen until the controller works. I"m going to try to disconnect the board that is sparking and see what happens. As I am at step zero in the startup sequence I honestly expect to uncover more problems as I progress.... the board in question is used to drive a Rheostat that varies the screen voltage for manual or automatic or remote power control, a function which has not worked since I have been here. I do not know if it had failed or was simply disabled when the Exciter/IPA were permanently removed. I'm am suspecting that it will do no harm to simply remove power from it.
Top

It's been a while since I cleaned up a water-logged transmitter, but I can tell you:

Inspect Everything on all possible angles. You will be surprised where crud dissolved and moved by the water flow has ended up.

Be sure to check that black cable coming off that HV standoff in the second picture. It looks like it's up against the cabinet wall. I've seen pinhole arcs happen in those situations.

The HT-10 used RG-8 (I think) to feed 7KV to the PA cavity. I don't recall the ring terminals being anything special.
Top

As far as the bias breaker tripping. Check under the bakelite terminal strip that is in your first picture.
Sometimes water/moisture gets underneath it and the terminal screws arc to chassis and sometime to each other.
You will need to remove the plexaglass "Danger" cover, un-nut the strip and raise it high enough to look under it
and see if there is any arcing to chassis or across terminal screws underneath. The terminal wiring should be long enough
to get a peek under it.
Top

The Wattcher wrote: ↑Sat Sep 04, 2021 1:31 am As far as the bias breaker tripping. Check under the bakelite terminal strip that is in your first picture.
Sometimes water/moisture gets underneath it and the terminal screws arc to chassis and sometime to each other.
You will need to remove the plexaglass "Danger" cover, un-nut the strip and raise it high enough to look under it
and see if there is any arcing to chassis or across terminal screws underneath. The terminal wiring should be long enough
to get a peek under it.

Fixed before I read this, but you were pretty close. it was the terminals strip next to the one in the picture, with the 550V taps of the bias transformer arcing. Pictures and more details when it's not a holiday......but shes back on the air at full poer once more!
Top 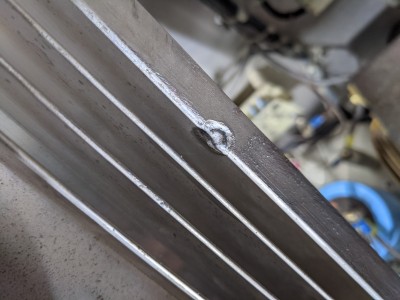 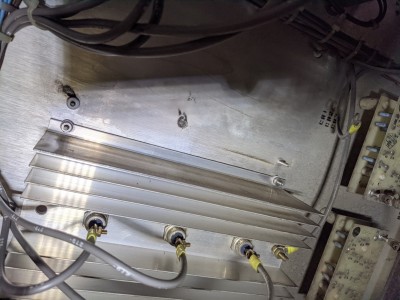 Cleaned up the arc damage here. diodes were OK. 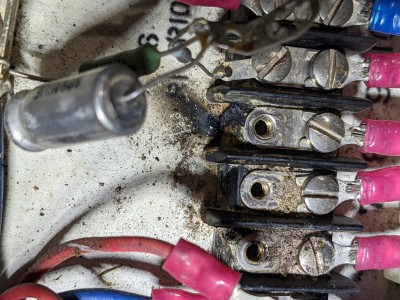 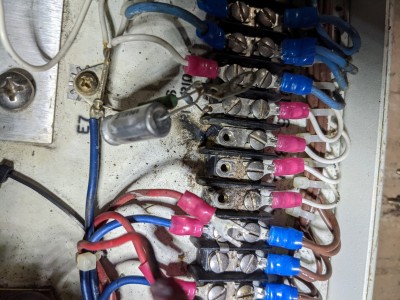 This was the real problem. forgot to photo the fix but basically the 500V lines of the bias supply were pulled off the terminal block and spliced together, covered in liquid electrical tape, and heatshrink.
Top
Post Reply
7 posts • Page 1 of 1