I thought I would share the details of a project I have been working on over the past months (and during the quieter holiday season have been able to finish).

Background: I help maintain five Z-10 transmitters (all running at 10kW TPO) which all have a nasty habit of "popping" fuses. At first I thought the problem was faulty SCR's - replacing them didn't help. Some suggested power spikes on the incoming mains, however logging the incoming power feed over a few weeks didn't reveal anything.

As the fuses are ceramic it was hard to say whether the fuse had melted slowly or exploded violently (which sometimes helps reveal the nature of the fault). Out of curiosity I cracked open a few of the failed ceramic fuses and was surprised with what I saw. It appears the fuse element was intact and had separated from the end-cap. 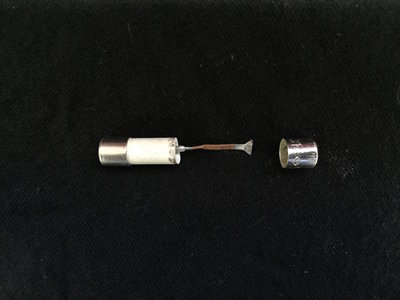 Anyone familiar with the Z-10 PSU knows there are 4 transformer taps the PSU controller can choose to use to change the output voltage. As the taps change so do the fuses the current flows though. It was concluded the fuses were failing due to thermal cycling creating stress on the end-cap joint. I checked other failed fuses and they had suffered from the same fate (incidentally the other fuses were from a different manufacturer, which reduced the likelihood of the problem being confined to a particular brand or batch.)

Despite having become rather proficient at removing Z-10 PSU modules for repair, it was happening far too frequently and I decided enough was enough. After discussing the matter with some colleagues I opted to redesign the PSU board to use a different type of fuse which would better withstand high operating temperature and thermal cycling. The fuse chosen is known as a JCASE automotive fuse (details here http://www.littelfuse.com/products/fuse ... s/895.aspx) and the internal construction of the fuse better caters for thermal cycling without creating stress on the fuse element.

Today I finished building and testing the first prototype board. It functions on the bench just fine, the next step is to put it into a transmitter to assess its long-term performance. If this manages to solve the problem in the long term then I might look at making boards available for sale in case there is anyone else in a similar position.

Here is a photo of the partially completed board: 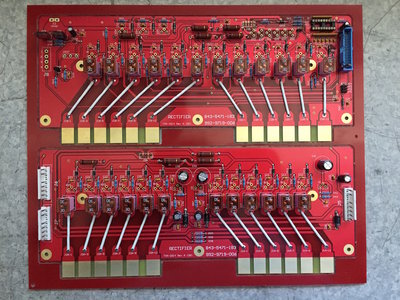 Here is a photo of the fully assembled module: 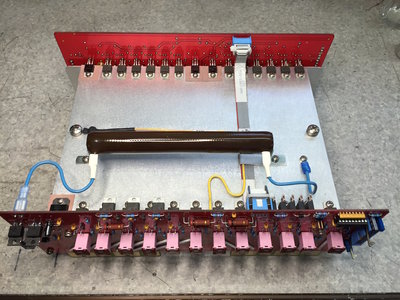 It might seem like a lot of effort to go to for a solution to a problem. The transmitters involved are for major metropolitan stations, the overall cost pales into insignificance when compared with the amount of revenue the TXs are responsible for handling!

Let us know how they work out for you - I'm sure others would like to know.
Christopher "Doc" Tarr CSRE, DRB, AMD, CBNE
Help support the Virtual Engineer, use our 1&1 Affiliate link if you need good, cheap hosting.
Virtual Engineer. The Broadcast Engineering discussion forum
Top

Looks nice (probably better than the factory board

Only question I have is whether a 58 volt fuse has a high enough voltage rating in this application. I am not familiar with these transmitters...
Mark Mueller • Mueller Broadcast Design • La Grange, IL • http://www.muellerbroadcastdesign.com
Top

The voltage rating of the fuse specifies the maximum voltage which the fuse will safely handle without sustaining an arc (only if/when the fuse opens). The specification for this particular fuse is 58V DC, which can be doubled for AC to 116VAC.
As the fuses are on the secondary side, and the highest transformer tap is 54VAC, they should be OK in this application...
Top

UPDATE: installed 2 prototype boards today and they've passed the first test. Applied power with all PA's removed first, then ran the TX for 4 hours at full power (into a test load). All volts, currents, and temperatures came up to the same level as previous meter readings. 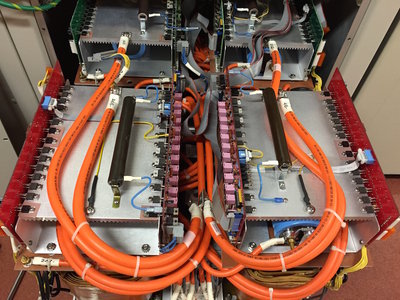 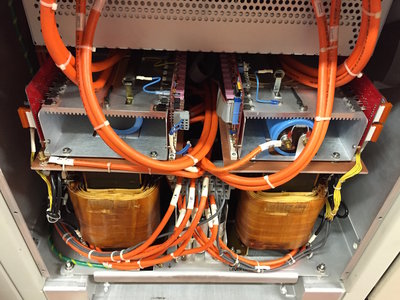 Update 2: New power supply boards have been on air for 10 days now, sailing along nicely!

Update 3: Well after 6 months of continuous operation the new power supply boards have passed the test - no failed fuses! This means I can now gointo full-scale production mode, making 20 sets of power supply boards to replace all the original boards. The PCBs have been manufactured (up to REV B now) and components have been ordered.

I wonder if my soldering iron will be up to the task!

Now, if you would kindly share the procedure for extracting those units from the xmttr, I would really appreciate it. I also have a Z-10 and this past weekend it went down due to a severe storm. I had no lights anywhere on the rig and started looking for fuses. Opened it up and looked at the buried fuses and gave up. The problem was solved, but due to significant embarrassment, I don't want to talk about it. It is back on the air. That is a real beast to get into!

(it was one of the three disconnect 60 amp fuses which I swore were showing voltage on the xmttr side.......senior moment-------duhhhhh!)

The procedure is in the manual, but the summary is this:

Glad you got your TX back up and running .. and even us "young men" are capable of overlooking things when the rush is on, so don't feel bad about it

Update 4: Well, it has been some months in the making but I have just completed construction of 20 sets of boards (revision B), with the first set of 4 being placed into service as of yesterday. Of course time will tell if this project has been worth while in terms of reducing the amount of maintenance time the original PSU design demanded. Based on the testing of the prototype board I am feeling somewhat confident

Here are 15 completed boards, plus one finished module 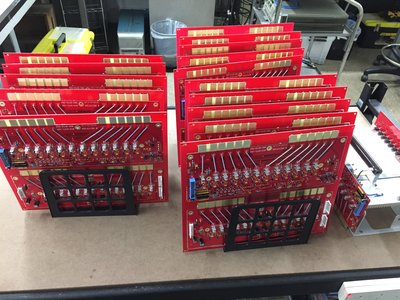 It has been quite an international effort - PCBs designed in Sydney and made in New Zealand. Parts made in countries like India, South Korea, USA, China and UK, and sold by suppliers from USA, UK, and Singapore!
Top

Update 5: a total of 16 pairs of rectifier boards are now installed in their respective transmitters and are in full-time operation. I certainly hope this puts an end to constantly having to wheel out the power supplies once a month to replace another open fuse. Certainly the owner of these transmitters will appreciate fewer alarms and better reliability now...
Top

I don't know if this thread is still active or if DaveK is till looking at this thread, but I have three of these beasts and (know of several more) with some problematic rectifiers.

I'd like to know if you have any left and cost. Chris, can you send this note to him with my listed e-mail address? Seriously, I'm interested.