Does anybody make a USB control surface that looks like an on-air mixer? Big mute and start buttons with lights, cueing, that sort of stuff? Doesn't have to be big, 4-8 faders is probably plenty...

I'm looking for something that looks like an Air 1, but all it is is control surface. No audio.
Top

How much would you pay for something like that?
Mark Mueller • Mueller Broadcast Design • La Grange, IL • http://www.muellerbroadcastdesign.com
Top

I could see the utility of that, for sure!

In the case of the Air-1 and Arrakis ARC-8, they have one input/output via USB. In that case the particular I/O appears as a USB sound card to the computer. You're essentially looking for a digital console with a built-in mix engine. Telos makes something along the lines of what you're looking for:

So DT's comment applies: How much are you willing to pay?

I had seen those, yes, Doc, but that's not what I'm after either. I want something that I can connect to the PC that *only* does control; I like the form factor of the Air 1 or the small Arrakis, but not their contents.

[ ETA: On second look, it looks like that Axia is a dry console: if they'd sell me *just the control surface*, and document the protocol, that would be good too, yeah. :-) ]

ALSA or JACK have perfectly serviceable mixers; I just want to move the control of them -- and the play commands to an automation program like Rivendell -- off onto a hard surface; sort of like what these do for live DJs:

No audio in that; just USB.

I could do this with an Akai Ableton controller like the APC-20 or 40: 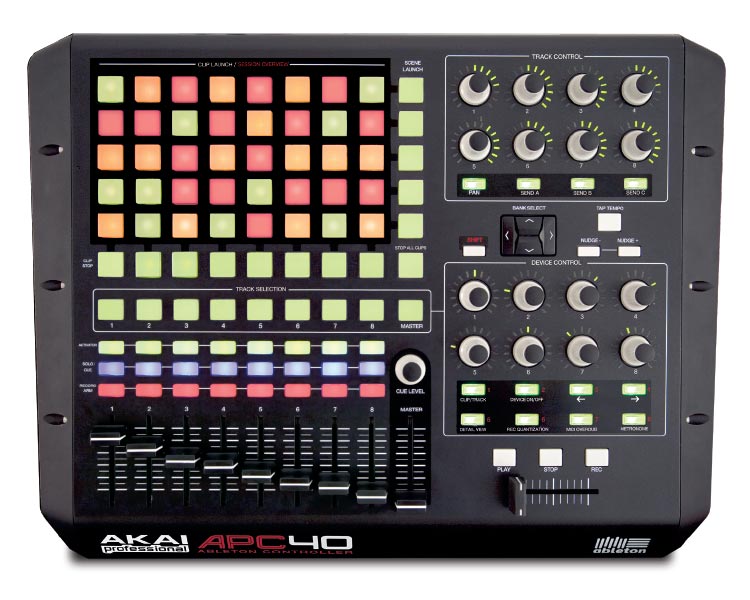 but the Start/Stop buttons are in the wrong place, and there isn't a wrist rest.

That controller's about $300; the smaller one without the right hand side controls is $200. That's about par, for a semi-consumer product, and I may end up having to go with the APC, for lack of anything better at a reasonable pricepoint.

All that would be required is a control-plane routing program to catch the USB commands issued by each control-move and send them to the proper pieces of software -- something which might already exist.

This way, though, all you need are a couple XLR inputs for mics, and you're done. Or, maybe, something like that SoundTool running in emulation, and another analog output to drive an exciter.
Top

Far as I can tell, Doc, they're USB, rather than MIDI, but yes, roughly that.

And for "station in a box", that's what you want; the only audio will often be your Mic in's; music is on the box, and your output is icecast. Or maybe, as I say, a second stereo out to a small exciter for community-LPFM category stations or campus carrier-current (does anyone actually do that anymore in these days of gigabit-resnets?).

So you get something like this, and you capture it's USB commands with a software router that sends the faders to your mixer, and the other buttons and knobs to the appropriate other places.

Totally get it now. That would be pretty slick not only for that, but for live broadcasts and the like. If you could but something like that together at a reasonable price, the sky's the limit!
Christopher "Doc" Tarr CSRE, DRB, AMD, CBNE
Help support the Virtual Engineer, use our 1&1 Affiliate link if you need good, cheap hosting.
Virtual Engineer. The Broadcast Engineering discussion forum
Top

And that's the problem: a reasonable price.

The reason that things get cheap enough to actually buy is that they go over the knee in the S-curve of manufacturing quantity vs tooling costs; almost the only way to do this properly is to find something suitable that's already in production and can be adapted. I've seen a few that have 80% of the job done, but nothing further up than that.

I suspect the Hail Mary will be to convince one of the already in production manufacturers who've done the hardware tooling to consider a controller-only model for a lower price, making to them the sale that it will draw in their direction people who will eventually upgrade, or who are already buying their stuff.
Top

Here's a very nice review of the APC-40:

[ That URL looks hincky to me, but I double checked it. ]
Top

And courtesy of that review, another possible contender:

And a large closeup; there appear two versions; this one with the 5-way controller on the right is probably slightly more useful: Nobody's going to touch this for broadcast for less than two large. Sorry. Not enough market to even bother retrofitting existing product to cannibalize the existing Ethernet-oriented surfaces. So you're stuck with "pro" stuff which is not really designed for broadcast use or semi-pro toys which have the same issues plus the added feature of poor RFI immunity and low quality parts.

If you could define the absolute-basic no-frills functions and layout you want it may be possible to do short-run production but we're still over $1K.
Mark Mueller • Mueller Broadcast Design • La Grange, IL • http://www.muellerbroadcastdesign.com
Top

Internet streaming. I assumed you are streaming from a broadcast environment. If not, nevermind.

Yeah, no; I'm talking about starting from scratch.

I have read the "heroic quantities of ferrite" paper; I know how much harder it is when the antenna sticks out the top. :-)
Top

Baylink wrote:Does anybody make a USB control surface that looks like an on-air mixer? Big mute and start buttons with lights, cueing, that sort of stuff? Doesn't have to be big, 4-8 faders is probably plenty...

I'm looking for something that looks like an Air 1, but all it is is control surface. No audio.

I've been dealing with this for years. You have either 2 choices. Cobble together a bunch of consumer type hardware from your local Guitar Center, or pony-up for some serious broadcast gear. ($8,000 - $20,000) There's really nothing in the middle at this point designed specifically for the mid-user Internet broadcaster.
JJ Nite
Funk Republic Radio
http://funkrepublic.com
Top
Post Reply
16 posts