We are moving a cluster of AM stations to a new studio and have to deal with STL problems.

One of the stations has an existing 950 STL link. It's a Moseley 606, and those systems are getting progressively harder to work on. The other two stations are currently on T1 lines and I'd like to put them on 950 also, if channels are available.

Just wondering what the best options are for new 950 analog STL equipment these days. Appears that the only companies with current product are Marti, Armstrong (which I understand is rebadged RVR), and Nicom.

Anyone have experience with the Armstrong or Nicom STL gear? I've seen the postings about issues with the Marti stuff and they are not high on my list.

And yes, we have considered unlicensed 5.8 and other options. For a variety of reasons, I'd rather stick with 950 for the time being in this application.
Top

Why not look at going with a digital IP type radio system instead?

Depending on the paths and the congestion in your area you might even be able to get away with inexpensive, unlicensed equipment although I would lean more towards licensed gear which should be no more expensive that the 950-mHz analog gear. And if you have decent Internet connections at the studios and each of the transmitter sites a VPN can be established over that as a back-up to the radio system.
Top

I have an Armstrong composite STL installed about 10 years ago and it's been, outside a single event, trouble free.
The studio tower was hit by lightning, the STL antenna was damaged and the output device in the STL transmitter went up in smoke.
Armstrong had a replacement part to me overnight at a reasonable price and it's been back in business ever since.

FWIW their solid state FM's are also very good, the 5kW we have here has been absolutely bulletproof. Total failures in 10 years: 2 PA fans, which are redundant and caused no downtime. They had those in stock, again reasonably priced. Wish I could say the same for their single-tube FM's. Not so good.

I agree with bypassing the Marti stuff. I'd rather not deal with BE for repairs. They just quoted me $179 for a Cellcast power supply that I ended up buying from DigiKey for $22. Still have a bad taste in my mouth from an IPA repair that they sat on for months, not bothering to tell me parts were unobtainable. No thanks.
<><><><><><><><><>
Chuck Gennaro
Central Wisconsin
www.northwoodstech.com
Top

Armstrong is OK as long as they don't make it.

I'd look into digital (IP) radios for the 950 band. You'll get more throughput with less hassle on the channel(s) you already have.
Mark Mueller • Mueller Broadcast Design • La Grange, IL • http://www.muellerbroadcastdesign.com
Top

Armstrong. I take care of a Marti composite--bought about 8 years ago--gone through two power supplies. The supplies are not expensive (Meanwell) but the new version of that supply is longer than the one used in the Marti's--may be a squeeze for the next replacement.

I like simple things--analog, repairable equipment. Heard horror stories--both on these lists and locally about mysterious interference to digital systems, while analog systems just chug along. There's an STL that runs through my station (2 hop) for an AM in town where the path profile looks like the Rocky Mountains--system works just fine, never seems to burp--and uses a STL-10 transmitter/receiver pair.

I've used Terrestrial RF for notification--they will also do frequency searches for you: https://www.rflicensing.com/
Top

Surprisingly, I've had really good luck with BEXT composite STL gear. It's frequency agile, doesn't seem to have any audio filter weirdness when running processed audio up the pipe, and has pretty darn good support from the folks in San Diego.
Skype:kellyalford Twitter: @KellyAlford
Top

Just when I open my mouth........9:30 this morning the amplifier module in my Armstrong STL shorted. Clear blue sky, no storms.
Parts will arrive in the AM. Here's the 10w amplifier strip: 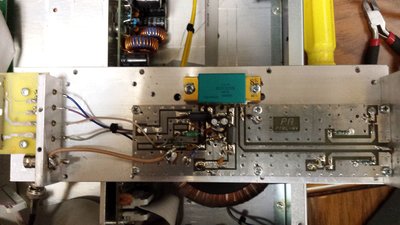 If there is any concern about unlicensed or 950 digital systems, I would go licensed 11 gigahertz digital IP links. The price has come down sustantially and on a properly engineered path, there is no problem with reliability or interference. Of the remaing analog links mentioned, I would vote 'none of the above'.
Top

Assuming you would be using a quality manufacturer for the gear the 950 digital stuff is pretty bullet proof. I run a couple of Mosely SL9003Q radios and a couple of Harris HD Link systems and both have been trouble free.

For backup audio and for data transport I have unlicensed Radwin data links with T-1 channels that I use with some old Intraplex T1 units. They are not nearly as reliable as the 950 stuff and it usually isn't weather related. As the hardware gets cheaper more and more of it is being deployed. Being unlicensed it is the Wild West with no frequency coordination. I routinely have outages due to interference from other users and I have had to change frequencies to resolve the issues and that is becoming a shorter and shorter term solution. Obviously market size is a big factor in the congestion.
Top

Add to that wireless devices not operating even close to where they are supposed to-or just spectrum dirty.

As I drive in each morning I often listen to CNBC on XM. Go past a particular church and the signal vanishes--best guess is a wireless router generating crud.
Top

There are a lot of people who have a lot of problems with 950 digital links and spend a lot of money trying to solve their problems. I think 950 is a bad idea going forward and I know some consultants who haven't spec'd them in over a decade.
Top

I have one of the Nicom analog units as a backup. Haven't used it for a while but it worked last time it was tried. The primary is a Starlink digital which works great since the path is short (2.5 miles).

The transmitter site is in a metro area but was a black hole for internet. The only service available was 768k/128k DSL.
Top

Be careful. Your license is only valid for one form of emission unless you have two separate frequencies licensed.
Top

W2XJ wrote:Be careful. Your license is only valid for one form of emission unless you have two separate frequencies licensed.

Both systems have licenses on the books.
Top

I do a fair amount of bench repairs. I have fixed a LOT of Nicom STL units. They seem to last about 2 years. Poor design. The Armstrong X-Link are my favorite of the current analog products. They are an RVR design. Very serviceable, and I have seen very few failures. Keep them cool and clean and maybe add a Polyphaser if you are in a bad lightning area. Not a fan of the current Marti product.
Last edited by level42 on Wed Sep 21, 2016 7:20 am, edited 1 time in total.
Top
Post Reply
23 posts