A case of PEBKAC (Problem Exists Between Keyboard and Chair)? Tell us about your war stories!
Post Reply
15 posts • Page 1 of 1

We have 4 wire delta. Electrician said the rotation was correct. IT protector went boom. UPS threw the breaker and does a nice arc flash/pop when you try to turn on its internal breaker.

Moral of the story: have your electrician pay attention to where the high leg is. Trust not the colored electrical tape on the wires, but rather trust in your $5 DMM. 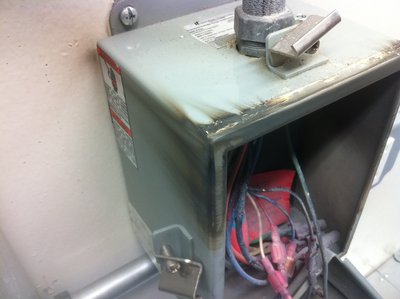 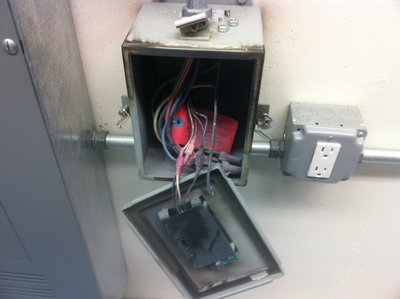 Well, I sorta like the way the soot blew out the little hole in the corner of the j-box and decorated the wall behind.
Mike Shane, CBRE
— — Omaha — —
Top

I absolutely HATE high leg delta three-phase service. It is an accident looking for a place to happen. It should have never been allowed, IMHO. Brian
Top

We had this happen too - when we put in a new transmitter (and new power service to support it) - electrician wired the high leg to one side of the breaker box. Smoked our lighting controller.

Good news about the situation: The power is now a lot more stable than with the old transmitter and service. Plus I never really liked that lighting controller anyway - it was hacked around and nobody really documented anything. We got a new one and it's wired to the remote control - so all is happy...until it calls daily about a side marker out.

Three-Phase Delta, with a High Leg, is called Open Delta and it is always troublesome. It may cost you several thousand to convert it to Closed Delta *(with all three phases operating at the same voltage) but it is well worth it if you want to keep your transmitter happy. If you have an older rig...you'll save lots of lost air time and save your rectifiers by paying to convert to Closed Delta. Been thru that excercise many times and always had good results after it was done.
Top

Correct me if I'm wrong, but I think the OP was referring to three-phase closed delta with a high single phase leg, sometimes called a "stinger". Pretty common around here.

Two of the single phase legs are the normal 120V, the high leg is around 208V. You have to be careful not to use that leg for single phase 120V loads.
Top

awsherrill wrote: ↑
Fri Dec 08, 2017 12:04 pm
Correct me if I'm wrong, but I think the OP was referring to three-phase closed delta with a high single phase leg, sometimes called a "stinger". Pretty common around here.

Two of the single phase legs are the normal 120V, the high leg is around 208V. You have to be careful not to use that leg for single phase 120V loads.


But you can do some serious drilling in concrete with a hammer drill wired to a stinger leg... At least briefly.

Thanks for reminding me about the tapped delta "stinger" configuration.... that certainly will get ya...if you aren't careful...
Top

I once had someone tell me that "there is plenty of room for more breakers in the panel...a third of the slots have blanks over them" when I asked where we could add a 120VAC circuit for an equipment rack.

I saw someone tell a story on one of these engineering groups about an electrician wiring the outlet for a break room Coke machine to the high leg...with the expected results.

I seem to remember here at the office they had to stop an electrician from tapping into the lighting circuit since it was 277.
Top

Deep Thought wrote: ↑
Sat Dec 09, 2017 10:59 pm
I once had someone tell me that "there is plenty of room for more breakers in the panel...a third of the slots have blanks over them" when I asked where we could add a 120VAC circuit for an equipment rack.

That is what happened to my "friend" mentioned earlier... An incompetent (but licensed) electrician installed a new power circuit for a new renter in one of my customers TX buildings. He used a convenient open breaker position not noticing that it was a 3ph service NOR checking the voltage.

I met the new renter up there one day to mount some equipment and he quickly hammered several holes in the the hard, hard old concrete walls but we noticed that his drill smelled and sounded a little funny. I checked the outlet voltage and IIRC it was something like 207vac.

I don’t KNOW if it was something similar to this but we had an electrician (using the term loosely) wire up a new Austin Ring transformer a few years ago after the old one burned itself up rather spectacularly. The fire dept even came to watch. I believe the fire extinguished itself but I digress.

The new transformer proceeded to tear through lamps in an awful hurry. I have a couple of beacons that failed, also spectacularly, that will make good conversation pieces. One of them looks like it used to be a lava lamp.

Turns out somehow the guy had about 140 volts going out there. I didn’t know you could do that! We were very fortunate we didn’t burn up the brand new transformer. No, the old one didn’t burn up because the voltage was too high. That was a new development.

The old transformer was already old when I started taking care of this site in 1998. I noticed it had quite a few cracks in its outer layer back then and, on the advice of a tower guy, wrapped it completely and tarred it over to keep the winter out. That lasted about 13 years. If the ring was original equipment, it would have dated to 1968. So it did ok. I don’t really know but I’d guess they can last a lot longer than that if properly set up and maintained. All the other AMs I had dealt with up until this one had either lighting chokes or a quarter-wave stub. The site with the stubs had open wire transmission lines.

ANYway, we won’t be calling that electrician guy again for anything. The GM liked him because he would work for trade out.

Ah, yes. The many "permutations" of three-phase (or should I say pseudo-three-phase in some cases) power service entrances.

Open Delta - as in "we don't need no stinkin' third transformer" to give you a three-phase Delta service entrance. (Just imagine a "normal" Delta configuration and then simply remove one of the three transformers while up-sizing the capacity of the two remaining by about 25%.) At least that's what GPU's Pennsylvania Electric thought at one time. Was putting in a new 5-kW AM rig, a Wilkinson (yeah, I know . . . ) and PENELEC "engineers" were adamant about not supplying closed Delta service. [I suspect that they were planning on feeding it from an open-phase "Y" feed (and there is such a thing), just to add insult to injury]. I explained that it was for sensitive electronic equipment and two of the three phases will have voltages all over the place in an open-leg situation, and that those transients could potentially damage the equipment. They "explained" that they never had an electric motor or resistance heater "burn up" from running on an open Delta service (which I still doubt). And besides they continued, you can do 5-kW with a single-phase service, done all the time with heaters, so we (the station) obviously didn't know what we were talking about. Fine, I said. We'll make it 208-volt "Y" service then. If you can pull that off with two transformers I'll eat my hat. (I still have that hat, by the way, after 40-years.)

Then there's "high-leg" Delta service with its very colorfully named high leg [orange (marked) leg as required by the Code, (or the "red" leg, which is incorrect by NE Code) or the even more colorful "bastard" leg, or the widowmaker leg or the "bitch" leg . This type of service was also done to save copper, eliminate the transformer otherwise needed in a 240-Delta system to derive 120-volts. The service entrance transformer has three 240-volt windings connected in Delta configuration. But one of those windings has a center tap that goes to neutral/ground which allows the derivation of 120-volts without adding that extra transformer.

And let's not forget the ever-popular corner-grounded Delta service. That one only needs two wires to carry that three-phase service with that third conductor being the "ground". Perfectly fine, unless that ground conductor opens (no fuses allowed in that "grounded" leg) and then you wind up with a severe electrocution hazard and a really effective firestarter.

Personally I don't much care for any "bastardized" systems like those. (WWII is long past and the need to save copper along with it.) All they do is add to the possibility of noise ingress and create unwanted hazards. I've even been known to add a transformer in the distribution system to help mitigate some of those issues (208-volt Delta to 208/120-volt "Y", breaks ground loops by re-establishing the neutral at that transformer).
And yes, I second, and third, not trusting the colors and using a voltmeter. And ALWAYS check voltages phase-to-phase and phase(s) to neutral (if present) and ground, and between neutral (if present) and ground both before and particularly AFTER disconnecting power. There have been a LOT of jack-legs out there calling themselves electricians that have set far worse traps for the unsuspecting than the one in your photo.
Top

A 120/240 3-phase delta is fine; it suffers from a misunderstanding due to perspective. In the 120/208 Y, you have a central ground point, and all points out from that ground reference are 120 VAC and 208 VAC from phase leg to phase leg. This is not true of the 120/240 delta, where one of the 240 VAC transformers is tapped in the middle and grounded. They are both three-phase; the principle difference is if you have 208 V or 240 V three-phase power or loads.

In a 120/240 3-phase delta, there are two 120 volt legs extending from the ground or neutral reference. This provides the 120/240 split-phase or single phase service we all know as "house power". If you go across those two phase legs, you get 240 VAC. If you go from a phase leg to the neutral, you get 120 VAC. From the neutral to Phase B, you get 208 V. This is a misnomer, however. No loads are placed across the B-phase to neutral. 120 VAC loads are placed across A or C and neutral. 240 VAC single-phase loads are placed across two phase legs: AB, BC, or CA. The 120/240 delta also has the advantage that one can install a single or split-phase panel on the load side of a three phase panel as long as the neutral passes through the three-phase panel. It truly is the best of both worlds.

More power for a given breaker size as well, without touching 277/480 Y.

It's important to watch that B-phase with a load monitor however. A failure of the B-phase won't be noticed since there isn't a 120 V load attached to it. Similarly, it's possible for the utility or an upstream electrician to switch the A and C phases, which does bad things to three-phase motors -- and the compressors or pumps attached to them. Since B remains the same (the red leg), switching A and C reverse the rotation of three-phase loads.
Top
Post Reply
15 posts • Page 1 of 1

Return to “From the Trenches”