I THINK IT IS TRYING TO TELL ME SOMETHING

I THINK IT IS TRYING TO TELL ME SOMETHING

Here is proof that the grid leak drip pans can overflow. 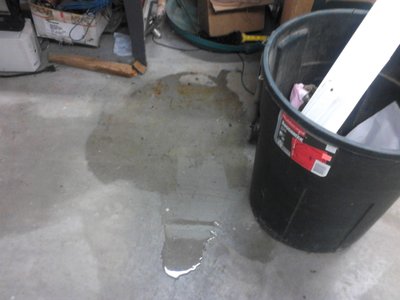 EDIT: Forgot to mention as I was on the phone while composing this....it is directly in back of a 10kw FM rig. The roof leak developed about 4 inches in back of the rear door.
Top

I was at a site "up nort" that had a bucket full of ice melter sitting in the corner. It had attracted so much moisture from the air that it filled the bucket about 3" deep and proceded to eat its way out of the bottom, leaving a nice salty (and surprisingly slippery) little puddle on the concrete floor.

I was greeted with this little gem a couple of weeks ago at a new to me client. Some genius decided it was a good idea to penetrate the roof of a mil surplus commo container to get the coax directly down into the TX. It had been leaking for quite some time as evidenced by the rusty screws and corrosion to the AL top plate.

The amazing thing was that very little water actually penetrated the interior of the Elenos TX due to it sitting a bit off plumb and most of the water running off the top and down the back panels...

I just found Through the Roof at a local Lowes. It appears to be just a jar of clear acetic acid (extremely strong vinegar smell) type silicon sealer/adhesive but it seemed to stick easily to the roof and boot surfaces even though they were pretty wet.

Now, to find a roofing contractor that doesn't want $5k to put a rubber roof on an 8x12 aluminum box....

The video shows the craziness...wow. Is there any hope of getting the line rerouted?
Top

At some point in the future... Yes. There are numerous side wall access ports in the container that would have worked great but I assume that the installer didn't want to fool around with (or have) elbows and/or rigid components. Not to mention that the walls are no more than 1/4in soft AL plate but they cut thru a 1/2in hardened AL roof plate as well as the 1/4in roof panel below that to come straight down into the coax port. The current installation pretty much precludes bypassing the main TX with an exciter feeding a Type-N to 1-5/8in adapter. The coax can't be picked up off of the top of the tx...

This and it's sister site are fun to work on.... Anything I do is an improvement. I understand that both sites were built with mostly volunteer labor so they probably aren't too bad considering.

These are a pair of those "boy do I have a story" sites.

I had one site where the flat roof began to leak directly into the top of a CCA AM transmitter. Water ran across the tube compartment, down the side, behind the contractors and began to pool on the cabinet floor underneath the transformers Transmitter couldn't care less, just chugged along.
<><><><><><><><><>
Chuck Gennaro
Central Wisconsin
Top

ChuckG wrote: ↑
Sun Jul 08, 2018 1:14 am
I had one site where the flat roof began to leak directly into the top of a CCA AM transmitter. Water ran across the tube compartment, down the side, behind the contractors and began to pool on the cabinet floor underneath the transformers Transmitter couldn't care less, just chugged along.

Many years ago I had an HT5 where a roof vent had been installed straight over the TX exhaust... Predictably, it later leaked and boy did that HT care.
--
Kevin C. Kidd CSRE/AMD
WD4RAT
AM Ground Systems Company
http://www.amgroundsystems.com
KK Broadcast Engineering
http://www.kkbc.com
Top

Roof vents can be problematic. At the first station that I ever I built the TX shack had a pitched roof and fairly standard roof hoods with louvers for the stacks. We had a nor'easter come through the night before we were due to have an on-air celebration for our 1-month anniversary of signing on. I got up there during the experimental period and found some water on the floor of the transmitter near the mod reactor. I dried everything up, brought the TX up at low power for a bit, then at the full 10 kW for a while, and everything looked good so I shut down and figured we had dodged a bullet.

That afternoon about 2 PM the TX shut down. I raced over to the TX site with the VP for programming on my heels. I quickly determined that the mod reactor winding was shorted to the core. "What do we do" cried the VP as he was tearing out his hair. "What you will do" I replied "is go back to the shop. Under the far end of the bench are some scraps of 2x4. Bring me two pieces about 2 feet long." While he was getting those I unbolted the reactor from the floor. When he returned we put the reactor up on the wood and got back on, albeit with a bit of distortion.

This was serial number 6 of the first CSI ten kilowatter. Out of the box it had such bad negative carrier shift that it barely passed an audio proof. Bernie Gelman was unconcerned as it would (barely) pass the proof. I called Bernie for a replacement reactor but none were in stock and he had a month lead time for getting one. I called Peter Dahl who had to wind one but he had a core on hand. We got it in a few days and it significantly reduced the negative carrier shift. Peter's iron was better than Bernie's.

"Back in the day", I got a call that an FM was off the air "up Nort". Found the basement got flooded and the FM rig was "kinda wet".

Gas company guy for some reason visited the site and shut off the gas to the station. Station experienced a power failure and the sump pump wouldn't pump. Emergency gen failed to start as gas got turned off....not for lack of payment----there was some weird reason they shut it off.

Found reactor had shorted to core. No lumber on site but we found a bunch of old tape cartridges. Elevated the choke on a couple and it worked slick as a whistle. Military calls that "field expedient".

Return to “Everything else”