Not to put too fine a point on it, but the photos show no DC connection from the tower to ground through the lighting choke. If that is indeed the case you need to add a static drain.

Any chance that could be somewhere else?
Top

Deep Thought wrote: ↑
Tue Aug 07, 2018 10:27 pm
Not to put too fine a point on it, but the photos show no DC connection from the tower to ground through the lighting choke. If that is indeed the case you need to add a static drain.

And not just for the well being of the caps. An insulated tower with no static drain will light up your world even with the TX off and no nearby tstorms. Especially if there is a breeze and low humidity. I have pulled 2in arcs from ungrounded towers just from wind induced static charge in low humidity conditions.

I"m going to go take some better pictures this afternoon, unfortunately I was not left the keys and can not locate them so I'm trying to get a new set from phasetek. two of four cabinets where unlocked,which Is how I found this mess.....
I can ask phasetek about the static drain, like I said this was installed about 18 mo ago, I'd have hoped it was done right but hey I wasn't in on any of this....I was taking care of a ton of FM's in Colorado for another employer at the time....
Thanks for the help.
Top

A static drain coil will be relatively fine wire (18 ga or smaller) wound on a phenolic or fiberglass tube about 18" long. There will be only one winding and it will terminate on screw terminals at each end. Phasetek's look like this (left, compared to the tower lighting choke on the right): 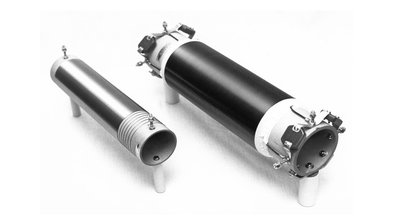 Thank you.
And I may have found the key too. now if it would just stop raining....might have to get pictures tomorrow.
Top

With a 138 deg. tower, be very careful about adding anything across the base and not creating some hiccups on 1400. Even an extraordinarily high impedance thing such as a SDC can corrupt the match of a wild base impedance.

But as others have mentioned, the capacitor bus at each end should be bonded to the ATU enclosure/ground and the feed point respectively. I just went through this and our consultant explained that with the floating coils not capacitively coupled, the "earth" side of the coils will look for RF ground all the way back to the electrical panel and capacitively couple to earth along the whole way. This can create all sorts of stability problems even on low impedance towers, never mind a RF transformer of sorts between the unbalanced coils of the choke. The capacitors balance that all out.

And what ever you do, avoid bonding the neutral of the coil in the ATU to earth in the ATU or tower base. Not only is that a NEC code violation going back 30+ years, it creates a fire hazard. The neutral should be treated as a completely insulated conductor like the hot in this application (unless a new NEC defined "service" is derived at the tower base...subject of another thread).

All things being equal, if you're not big on AM RF, get with someone who is. A wild impedance tower (which you have on 1400), can be a very challenging thing to deal with and need specialized test equipment to measure the base impedance before and after any work done. The stray capacitances can send you off in any number of directions. It's a learned skill to know what to look for and react accordingly.

FWIW, Kintronics had their bypass caps at something less than $35 when I talked to them earlier this year. But with such a wild impedance on 1400, it's best to goes back to Kurt and replace with identical components.

Keep us posted on your experiences....

Two AM sites I care for have a common practice of old; the tower light neutrals are bonded to the tower steel, and the neutral bonded to tower ground on the "cold" side of the lighting choke, which lets the lighting choke double as the static drain. In those setups, the doghouses are all several hundred feet from the transmitter building. This isn't allowed under current code, not even the exception to NEC 250.32(b), because the coax shield creates a metallic path back to the service and breaks a condition to the exception.

All things considered, I'm not going to change something that's worked for over 50 years.
Top

If the flasher is mounted on the tower then you can use a three wire lighting choke without violating NEC. One winding, usually the middle, is used as the DC static drain and has no connection to the tower light electric feed. I've seen some which were set up with a three wire choke in this way but for whatever reason the capacitors for that winding weren't removed on either end. That is probably not the case here since the electric feed looks a bit sketchy too.
Mark Mueller • Mueller Broadcast Design • La Grange, IL • http://www.muellerbroadcastdesign.com
Top

Flasher is inside the transmitter shack. one flashing beacon on top, dual side mounted steady burning halfway up. Yeah it looks little sketchy...I never paid much attention in the past as the company I worked for didn't own most of the towers we were on and the ones we did own where short enough to not be lighted. Now I'm here and this is the only tower we own. I'd say the tower(and this ATU) are some 200' give or take, from the transmitter building
Top
Post Reply
24 posts

Return to “AM Radio”