About two weeks ago my HT-35CD went off air, A storm was rolling in, I assume lightning strike. Arrived to the site to find the mains service panel breaker tripped. Put the exciter on air and did a little troubleshooting, but it was late and a storm rolling in so I left the site to sleep and return in the morning with help.

Site is co-located with a TV Transmitter so I got the TV engineer up there and we determined the power was safe to turn back on, tried to start up the transmitter, and got no filament voltage. broke out schematics, there was a Solid State relay (90A) that was supposed to turn on. it had voltage to the control inputs but didn't work, so we bypassed it, and the filament came up. Called it a day.

I ordered a new relay, and when it arrived put everything back together and ..... Still didn't work. So I bypassed it again and left the site again. 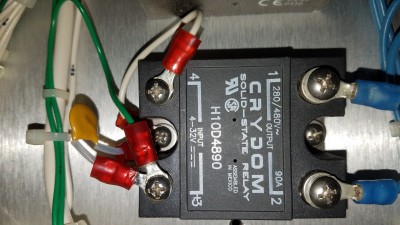 That is the original relay, it had this MOV across output terminals 1 & 2. I can't fathom why, but it was there and on another similar relay. It checked good but was replaced anyway, still no go. the cap on terminal 3 goes to ground, it was not shorted as far as my fluke could tell. 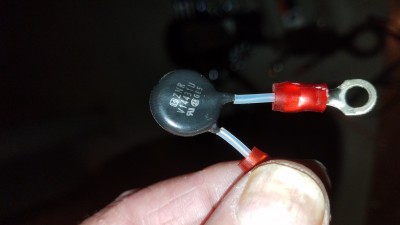 I'm out of ideas and had other problems to attend to (Failed A/C at my other FM site...it never ends does it?).

Anyone have any thoughts on this one?

What turns on the solid state relay? Perhaps there is nothing wrong with the relay, just the circuit that turns it on?
Top

Strange situation to say the least.

Had run into filament voltage probs on an HT-25 (I think the low level circuits are pretty much the same as the '35) that were traced to a failing external fil voltage regulator. Though, probably not in your case. Only other think I can think of is a failing fil voltage rheostat, but that really doesn't make sense in your case either.

How about the fil contactor? If it had partially deteriorated (coil), would it be possible that the SSR wouldn't handle/pass enough current to pull it in? Bypassing it (SSR) would give it all it needs to pull in.

Retreating back into the noise floor......

I think the HT series all used a similar control board; the problem here might be a failed IC on that board. Here's a circuit description from my HT-10 manual:

Two of the inputs to integrated circuit U32B are connected to the +15 volt circuit and the fourth (pin 1) is held at the +15-volt level by resistor R204 (unless the FIL OFF pushbutton switch is depressed). When the FIL ON circuit is closed (by completing a path from +15-volts to integrated circuit U32B-2), the output of integrated circuit U32B goes to the “LOW” state. This output is connected to two circuits. One of these, integrated
circuit U15H, inverts the “LOW” input to a “HIGH” output and passes it to the main cabinet thru receptacle J2 where it connects to the Filament SSR
(Solid-State Relay).
If the blower circuit breaker is closed, the blower starts. When the air pressure builds up and the Air Switch closes, the Filament circuit is activated and Filament voltage is applied to the tube.

Looking at the HT 10 overall schematic, the filament SSR gets it's power from TB2-15, while TB-2-2 is the other side of the SSR
Top

AS I recall, the schematic I was looking at said we should have 11V triggering the SSR, which we checked for and it was present. When I get up there next week I'll look at the contactor, and also the controller board.

Nathaniel Steele wrote: ↑
Thu May 09, 2019 1:11 pm
AS I recall, the schematic I was looking at said we should have 11V triggering the SSR, which we checked for and it was present.

If you have a scope handy, you might want to take a closer look at that trigger voltage and make sure you really have solid DC on the relay input and not a train of pulses. I chased a similar problem a few years ago where a solid state relay should have been pulling in a contactor... it turned out that a huge amount of ripple in the logic supply was producing pulses on the relay input that fooled my meter -- but wasn't sufficient to activate the relay.

"A request for FILAMENT ON produces the following events:
if the Three-phase Line Monitor is satisfied with the condition
of the power delivered to the Main Cabinet, the DIGIT™Exciter
is turned on and the Blower is started; when the Air Switch
closes, the Filament solid state relay (SSR) is energized and
voltage is applied to the PA Filament; if the Main Cabinet doors
are all closed, power is applied to the IPA Power Supply.
Finally, if the High Voltage Power Supply cabinet doors and
grounding-sticks are all in place and the three phase power is
applied to the High Voltage Power Supply, the “Drop Solenoids”
operate, removing the short circuits that protect against
accidental application of high voltage.
Each step in the above sequence is checked by the computer.
If an error occurs, such as Filament voltage too soon (indicating
an open filament) or no Filament voltage (indicating a shorted
filament or Filament Circuit Breaker open), the sequence is
reversed and the transmitter is shut down, with appropriate
indicators illuminated on the front panel of the HT 30/35CD."
Top

If you carefully disconnected and taped off the control lines to the SSR, and clipped a 9V battery across the control input of the SSR, that should operate the SSR. Might be worth a try.
Top