I had a crew on the tower today finding an air leak. Turned out to be a lightning hole in the top antenna bay. But they were mentioning that this antenna which is licensed as an omni had 2 horizontal parasitics on each bay. The only reason I can think of that one might do that is to null out any effect from the mounting on the tower. Am i wrong in thinking that? Or is there another reason for an omni antenna to have them? And what might the "rings" with the small line attached with hose clamps be? An old deicer install?

If you like pics of a leaky antenna... Patched over for now and the crew will return in about 3 weeks to haul that bay to the ground for repair. 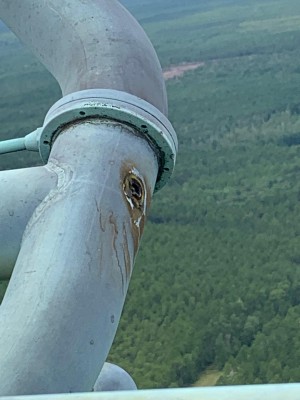 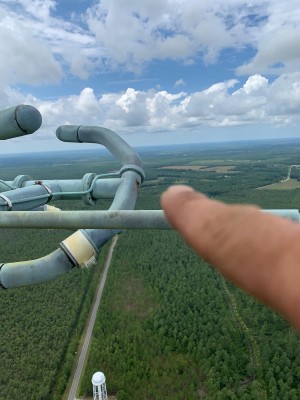 Yes, for stations wanting uniform and balanced coverage both in azimuth and H/V distribution, adding "optimization" parasitic elements is common. Particularly with wide face towers. Several of my stations have them. It really makes a difference where the tower is centrally located in a given population cluster or metro to not suffer drop-outs.

In the not too distant past, a Texas station was cited for using pattern optimization to make an omni antenna directional to the point the peak was something like 4.5dB greater in a narrow azimuth spread and coincidentally kill 70dBu coverage over the CoL in favor of a distant metro. The ultimate rim-shot. The well known antenna manufacturer was a bit blushing when confronted with the fact the licensee utilized the extreme pattern modelling and optimization in that manner. Whether the licensee misled the antenna manufacturer is unknown...publicly. But they are now especially vigilant about the use of their range for modeling and optimization so as to stick to the letter of the rule.

The parasitics are either an attempt to negate the effects of side mounting OR an attempt to "optimize" the signal in a particular direction. My understanding is that the FCC doesn't care much about manipulating the radiation pattern via positioning and spacing from the tower but gets a bit pissy when you start adding parasitics to a licensed omni antenna. I built a site where the owner wanted as close to circular pattern as possible for his Class C and had the new antenna built with parasitics. IIRC, the antenna was Dielectric and they told him that he must retain their patterns and pattern report in case a knowledgeable FCC inspector noticed all the extra hardware. The pattern looked like a broad and symmetrical 3 leaf clover with the parasitics and much more cardioid without the parasitics at any available position and spacing.

As to the rings and hose clamped tubing... I think that it is probably heater wiring but I have had so few antenna's with heaters down here in the land of "We don't need no stinking heaters... Do something, the TX is off the air due to icing" that I have never seen quite that configuration.

Lightning hole... Not that there is anyplace on an FM antenna that lightning can't or won't burn thru, that seems to be a pretty odd place to me. If you or the tower crew has the knowledge to disassemble that element (and more importantly, reassemble it...), I would have a look inside. I have never disassembled an FM antenna with anything other than a reciprocating saw so can't be much help there. That is obviously an old antenna but if the manufacture is still in business, a call to them might be in order.

Usually the tower distorts the v-pol radiation pattern more than it does h-pol, so if the goal of adding parasitics to an "omni" FM antenna is to produce a better match of radiated ERP in the two planes, vertical parasitics are required (not horizontal).

Removing one bay of an FM antenna array will affect its input SWR, and more significantly for a lower bay count (say 6 or less). Even if the damaged array is fitted with some means to stay pressurized with a missing bay, reduced input power or a standby antenna may need to be used in order to stay on the air when repairing the lightning damage.
Top

Antenna manufacturer's used to "optimize" antennas for a minimizing of tower interaction with the pattern. Then some went overboard and the the FCC decided they were making directional antennas. The parasites you have are for the horizontal component only. In the basic sense they would pull in the back side of the pattern and give more "push" on the front side. Take a look at the antenna heading and see what is out there for desired coverage.
The FCC does not look at how a standard antenna is oriented on a tower, so face interaction can be used for an omni, by getting generic patterns from the supplier/manufacturer and deciding the install orientation. When building new sites, I would start by looking at the "generic patterns and face tower size, then layout the guy anchors to lead to this antenna orientation.
Hope that helps.
Top

I'll answer the easy one.

Those are de-icers. It's not unheard of for someone to buy an FM antenna with the deicing elements attached, but never wired up, as "down the road, we may want to tie them in", idea.
http://www.necrat.us

"Arguing with an engineer is like mud wrestling with a pig. After a couple of hours, you realize the pig likes it"
Top

If you look at the second picture, you will see the horizon in the distance. The orientation of the hole, if done by a bullet, would require the shooter to be nearly even with the element, and at the same elevation. If shot from the ground, the hole would show signs of a glancing impact, and at that angle, I doubt there would be any penetration.

That would be some lucky shot! This bay is 990' up. Definitely lightning.

This antenna is an ERI 8 bay for a class C1 about 20 miles out from the city of license and mounted on the tower face looking in that direction. It is an older install from about 1985.

There is a breaker on the panel labeled for de-icers, but no wiring to it. I had never seen what they actually looked like on the bays, so the "rings" looked odd, but thinking about it, I can see how they would work. In coastal North Carolina I can't imagine that they'd be used much.
Mike Dinger
Wilmington, NC
Top
Post Reply
9 posts • Page 1 of 1